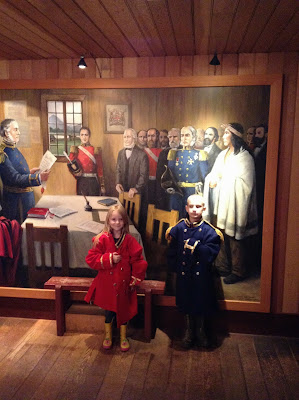 dressing up and getting the scowls right

Last week we didn't have much to do with our history curriculum as we're finishing up the year and I'm tired of the kids' text book we've been reading from, frankly. Instead, I declared the afternoon a field trip and we were going to check out our local town's national historic site, Fort Langley.

Wow! What a gem. I had no idea that this living museum would be as large, interesting, and completely child-friendly as it was. While we were there a pack of 5th graders (?) from a local French-immersion school was also there, and we loved getting to stand in at their presentations (all in French, of course!) as well as taking off on our own, with the audio wand as our guide through the 24 buildings, rooms, and sites of the first fur-trading location this far west from the Hudson Bay Company. 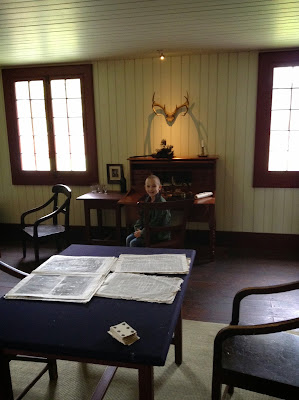 There were people milling about on this slow Monday afternoon, workers in period dress and able to answer any questions. I found out later that the entire site is okay to touch, unfortunately, scolding my kids unnecessarily for putting their hands on all the things. Next time I'll know better and let them touch away. That is the best kind of museum--the artifacts begged to be held and felt!

The top three pictures are from 'the big house', where a wealthy family lived, where important decisions were made, where gold was weighed, etc. The bottom picture is from the actual fur-trading building, full of various animal pelts, packaged cubes (you can see mid-line in the photo--they're huge and heavy!), and the beautiful wool blankets that the HBC was known for at the time, and still is! 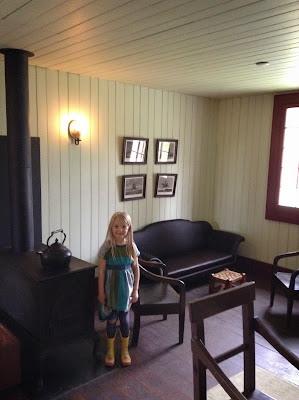 Ani keeping warm by the fire in the family room

When purchasing tickets and selecting an audio wand, I chose one for the three of us, but realistically, it didn't work as great as I thought it would. The kids got frustrated that they couldn't hear very well, since it's really made for one person, and I felt if I would have purchased one for each, they would enjoyed the audio portion so much more, and learned a bit more about it rather than me trying to listen with one or both of them and recapping their "what? what did they say?"

The audio wand tells 24 stories, historical importance and individual's stories from the time they spent there. There were children who told of growing up in the fort, and men and women's journey's all the way from Hawaii! It told of the shipbuilder's family and why the specific river boat (one on site) was made to hold all the weight while still being able to ford the rapids. It was fascinating and very well done. 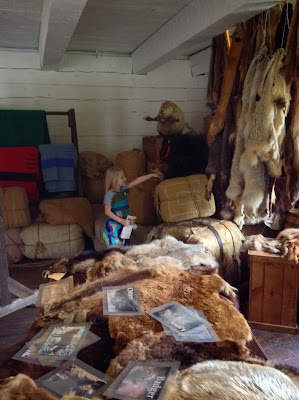 This is the kind of tour I like to go on, and that my kids love to explore. There haven't been as many opportunities for these types of field trips, simply because I don't know what's out there or available until someone tells me or I happen on it on my own. The Fort Langley Historical Site, though, is a gem and should be given a full afternoon. The cashier told us we'd need a bit over an hour, we were there for three and I was begging my kids to leave because I hadn't had lunch yet and was starving!

Living museums are great opportunities to instill a Love of Learning in your home, and if you give kids time to explore, and the ability to touch and receive information in an engaging way, you and they will retain so much more. Just don't forget to bring some snacks...

Popular posts from this blog

How To: DIY Sand/Water Table

May 18, 2009
How To: Build A Sand/Water Table for Under $30 ! Sorry this took me so long to blog, but I had to have a tool list and full instructions before I could do so. A little history on my love for the sand/water table . I love the idea behind tools for tiny hands, i.e. the Montessori Method , and like to have Lukka 'figure things out for himself', even when he is playing. I try to have the most simple and basic toys available for 3 reasons: a) simple toys generally have less parts, which means less of a hassle for me b) simple toys inspire way more creativity and imagination than do 'exact replica' toys c) they are much more aesthetically pleasing to look at, therefore, not making every nook and cranny of our house an eyesore! I know the last reason is just for me, but it's true. Plastic things don't generally last 1/2 as long as wooden or fabric toys, and they are unattractive. For this reason, I started to look for a wooden sand/water table as opposed to a pl
13 comments
Read more

February 17, 2021
Ani has grown at least four inches this year and is nearly my height at 12. She has grown in her artistic ability and loves to change her room up, organize, and play with anything art or craft related for hours on end. Often her creativity amazes me for someone her age. She is a better skier than I'll ever be, and has that 'can-do' Mast attitude ("I just think I can do it, so I do it") that is worth its weight in gold.  She is determined when she has a goal and has gone from zero ability to kart wheel to not only kart wheeling, but doing back-bends, leg lifts (straight up and down with her legs!), the splits,  contortionist positions (see below), and incredible dance ability  all because she steadily worked at those goals.  We are so proud of you, Anikka, and we love you! self portrait    What is your favorite color? green  Who are some of your friends?  Lilah, Audrey, Anya, Marie, Kate, Ophelia, Charlotte, Charlee, Summer, Emily, Isla, Kathryn, Anna, CJ What do y
1 comment
Read more