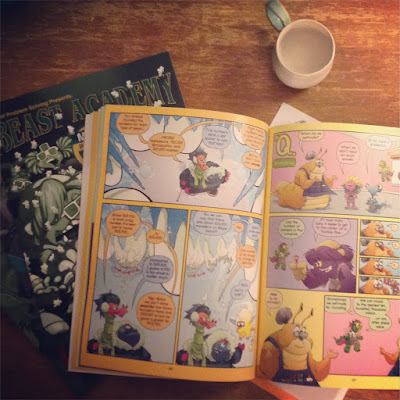 I honestly meant to write this a solid two months ago when bouquets of newly sharpened pencils* were like stars in my eyes, but let's just cut to the chase-that back-to-school Great Expectations mumbo jumbo is over and we're eyeballs thick into the work of the year. So far, the past 6 weeks have been going pretty well, but talk to me at the beginning of February and I may have 4 pencils sticking out of my hair, glue hanging off the table in a hardened state, and tears of mania in my eyes.

Besides my less than stellar blogging stats as of late, I do want to share our curriculum for the year, because I find those posts by other home schoolers both fun and helpful to me when I'm in a slump, need to switch, or just find something new to get the train up the hill (I'm looking at you, early May sunshine!). Here's what we've got for the kids:

Lukka is starting a new math program this year after 4 years of Singapore. We love Singapore, and if Beast Academy doesn't work out, we'll go back. But...I had to try a curriculum that I'd heard good things about (though it's so new most vendors don't even know about it) that has a full-color comic book for each textbook level.  Ani is working on Singapore 2B, having finished 2A in first grade. She's nearly half-way through it in just 6 weeks, so I don't doubt she'll move up to level 3 within the year. She's always been a math whiz. We also had the school buy us Say Cheese, a multiplication board game for extra practice.

During Morning Time we usually do bible, handwriting, and a read-aloud (usually a chapter of a novel). We're still using the Ergermeier kid's bible, an Odyssey devotions based in Matthew, and  the Truth & Grace Memory Book 1 from my online friend Renee. Every once in awhile they'll watch something on our school-subscription of Right Now Media, which I love but barely find the time to get to.
The kids have started using Handwriting without Tears; Ani doing level 1 printing and Lukka doing level 3 cursive, which he finds much easier than print.  For Language Arts, we're reading through the entire Narnia series in their originally published order, and we're 2 books down. Ani is still working steadily at one level per day on ReadingEggs.com and Lukka is now on Level 3 of Susan Barton remedial phonetic program. He is on an iep for dyslexia and has been since early Spring. More info on that soon.

This year the kids are a part of a local co-op and that has been so wonderful. Lukka's class is learning about the Japanese Canadian internment during WWII, and taking learning camps (4-8 week focused programs that our school puts out) including Little Bits and Cubelets. Later in the year he'll be doing an awesome hands-on Space unit, and another term is unknown to me as of now. Ani's group (the group I teach with) are doing a Grammar/ Parts of Speech lapbook and also a Geography/Wonders of the World unit study, which has been not only so fun, but so full of great learning, too. Later she'll be doing a Private Eye (writing, nature study, art) unit and also a lapbook on nutrition. There is one other term unaccounted for that is unknown subject matter to me but another teacher is in charge of that!

As for social studies, this first term the kids are learning all about First Nations tribes of the Pacific side from BC up north through the Artic circle, including tribes like Haida, Coast Salish, Inuit, and more. We've been reading myths, learning about culture including art, tools, daily life and also about geography and food sources in their areas. One of two best books we've used (mostly all library resources) are A Native American Thought of It! Inventions and Technology and Keepers of the Animals, an anthology. The kids are creating lapbooks about what they find interesting in all our study.

Right now, these are the things we've been using on a daily or weekly basis and have been enjoying. I haven't been focusing on Science this term but we'll get to it later. I like to divide Socials and Science into different terms so we can go deep with the subject matter and not feel rushed. What are your kids enjoying in their school year?

*Always watch You've Got Mail in the Fall. It's a thing.

Popular posts from this blog

How To: DIY Sand/Water Table

May 18, 2009
How To: Build A Sand/Water Table for Under $30 ! Sorry this took me so long to blog, but I had to have a tool list and full instructions before I could do so. A little history on my love for the sand/water table . I love the idea behind tools for tiny hands, i.e. the Montessori Method , and like to have Lukka 'figure things out for himself', even when he is playing. I try to have the most simple and basic toys available for 3 reasons: a) simple toys generally have less parts, which means less of a hassle for me b) simple toys inspire way more creativity and imagination than do 'exact replica' toys c) they are much more aesthetically pleasing to look at, therefore, not making every nook and cranny of our house an eyesore! I know the last reason is just for me, but it's true. Plastic things don't generally last 1/2 as long as wooden or fabric toys, and they are unattractive. For this reason, I started to look for a wooden sand/water table as opposed to a pl
13 comments
Read more

Why Black Lives Matter is a Pro-Life Issue

June 07, 2020
Artist Jane Mount The first night of the protests that started after George Floyd's murder by a Minneapolis police officer had my mind racing. I was reading and listening to news reports on and off, and have been for nearly two weeks now. I have been online way too much than is good for me, but I can't  stop reading because I am learning so much. In such a short amount of time, I've learned all about some of the systems that protect the police, what happens when the social contract is up, and that moment of realization that I'm someone to fear , and most importantly, what it looks like to be(come) anti-racist .  I know I am learning so much about racism just in the last two weeks alone, and here I thought I was someone who 'knew'. Dang, I was so wrong. So misinformed. So clueless and ignorant--still am. I am committed to learning more, speaking out when appropriate, and shutting up when appropriate. The only way I can try to help in the immediate time period,
Post a Comment
Read more

February 17, 2021
Ani has grown at least four inches this year and is nearly my height at 12. She has grown in her artistic ability and loves to change her room up, organize, and play with anything art or craft related for hours on end. Often her creativity amazes me for someone her age. She is a better skier than I'll ever be, and has that 'can-do' Mast attitude ("I just think I can do it, so I do it") that is worth its weight in gold.  She is determined when she has a goal and has gone from zero ability to kart wheel to not only kart wheeling, but doing back-bends, leg lifts (straight up and down with her legs!), the splits,  contortionist positions (see below), and incredible dance ability  all because she steadily worked at those goals.  We are so proud of you, Anikka, and we love you! self portrait    What is your favorite color? green  Who are some of your friends?  Lilah, Audrey, Anya, Marie, Kate, Ophelia, Charlotte, Charlee, Summer, Emily, Isla, Kathryn, Anna, CJ What do y
1 comment
Read more